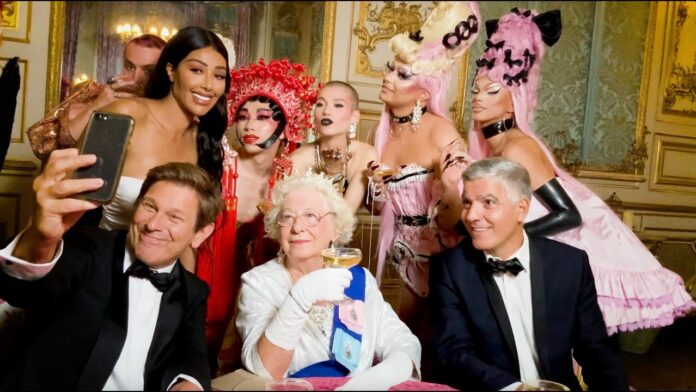 Filming Location: Belvoir Castle was the home of the Duke of Rutland, where the generations of the family lived for almost a thousand years. Four castles have stood on this spot since 1067. Besides the Duran Duran video, The Belvoir Castle has also been featured in Netflix’s The Crown, the 2006 Tom Hanks movie The De Vinci Code, and others! The Duchess of Rutland’s son, Hugo, makes an appearance in the video.

The Anniversary video was filmed in about three days and features a wild, celebrity-filled party complete with booze, gambling, dancing, and a pool party. Even Queen Elizabeth II gets in on the action.

Simon, John, Nick and Roger plays themselves. Yasmin Le Bon also makes an appearance as herself.

Anniversary features a lot of reminders of Duran Duran days-gone-by.

The bass is reminiscent of Wild Boys.

The opening notes have a similar sound to Night Boat and New Moon on Monday.

The lyrics “celebrate this union” reminds us of Union of the Snake.

“Anniversary is a new song that not only commemorates our ability to stay together for 40 years but tips the hat to any partnership and friendship that has stayed together.” – John Taylor

“With this one we decided that after four decades, we could actually look back a little — particularly with Anniversary, which is celebrating our time together. We reference lots of things, most notably Wild Boys.” – Nick Rhodes